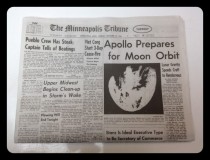 It was dark, and it was cold. It was February in Minneapolis and seven o’clock in the morning. My bundle of papers was there in front of my house, as it was every morning. During the winter I used my sled instead of my bicycle because of the snow and ice. I had mounted a box on my sled to keep the papers from sliding off.

It was too darn cold to fold the Minneapolis Morning Tribune as I did in the warmer months when they could be easily thrown from my bike to the front stoops of the homes of my paper route customers. On the other hand, despite the terrible weather this time of year, my morning paper subscribers could be assured that the “Trib” would be hand-delivered and placed conveniently under their doormats or inside their storm doors if they had them.

I was twelve years old and proudly self-employed. As a matter of fact I had two paper routes. In addition to The Daily Tribune, which paid me the grand sum of six dollars a week, I delivered another paper in my neighborhood. The Minneapolis Shopping News was a Thursday “throw-away”, as my customers called it, for which I earned another eight dollars per month. The Shopping News was easy. I could deliver it anytime in the afternoon. The Tribune was something else. My customers expected to find it on their porches every morning so that they could enjoy it with their coffee before leaving for work.

I really envied my buddy, John White, who had the Star Journal route. The Star Journal was the evening paper his customers read when they got home from work at the end of the day. The Star Journal also published the Sunday paper, for which he was paid an extra dollar a week. Ours was a friendly rivalry, however. If I was sick, away at camp or on some family vacation, John or his older brother would deliver my papers and vice versa.

The people on my route were pretty good folks. Ours was a middle-class neighborhood. Most of the families came from German or Scandinavian stock who, for the most part, were hard-working and paid their bills on time. Only on a few occasions did I have to drop a reminder envelope off to one of my customers. This day was one of those occasions.

I always thought the Halvorsons were very nice. On cold mornings like this one, Mrs. Halvorson would often invite me in for a cup of hot chocolate. This particular morning, my supervisor left an envelope containing a reminder for me to hand to the Halvorsons. As a matter of fact, I was kinda looking forward to Mrs. Halvorson’s  hot chocolate, it being something like ten degrees below zero. This was before anybody knew anything about wind chill factors.

I rang the bell. The porch light went on, and there she was in her housecoat waving me around back to the kitchen door, which made sense as my boots were covered with snow. Mr. Halvorson’s car wasn’t in the garage, so obviously he had already left for work. “Oh you poor boy.” she said “You must be freezing! Take off your jacket and boots and come in and sit by the oven. I will make you a cup of hot chocolate.” Then she said, “Your cheeks are red. Come here, let me warm them up.” She put her hot hands on my cheeks and they felt good. Then she wrapped her housecoat around me, which seemed a little strange.

What happened next was one of the most embarrassing things in my young life. I started to get hard! Mrs. Halvorson laughed. I didn’t know what to say. She hugged me tight, and I got harder. Then the phone rang, and she left the room. I had heard stories about lonely housewives and delivery boys, but I couldn’t just leave and walk out the door.

She returned after what seemed like forever. She was fully dressed and sat down beside me to put on her overshoes. She explained that it was her husband on the phone. His car had stalled and she was going to drive out and give him a push.

“You can stay here until I get back.” She offered.

I gulped down my hot chocolate, put on my boots and jacket and we walked out together. She gave me a kiss on the cheek and drove off to help her husband. Then I realized two things; I had forgotten to leave the collection envelope… and I was still hard.

I left the envelope in their mailbox, and the other thing went away on its own.

People in Minneapolis on Thursday November 11, 1940 will never forget the big Armistice Day snow storm. It was one of those once every 100 year storms that people use as a foul weather basis of comparison.

Actually, it had started snowing the day before, and by mid-morning the town was virtually shut down. Forget about school; the roads were closed and bus and streetcar service halted. I got a call at 7:00 in the morning from Tribune circulation notifying me that the morning paper delivery was being cancelled. Boy was I relieved.

I’ll admit I don’t know how the bundles of Shopping News got on the sidewalk in front of my house. The snow was falling so heavily I could hardly see. I couldn’t believe they expected me to go out into that storm. Anyway, I did. Well at least I tried.

The snowfall let up a little about 4:00 in the afternoon. I put on my heaviest clothes. My mom insisted that I wear a scarf over my face so I wouldn’t get frostbite. I tied the bundle onto my toboggan because the snow was too deep to use my sled, and courageously plunged out into the knee and sometimes hip deep drifts.

But let me digress.  I have to describe the geography of my newspaper routes. Minnesota is called “the land of 10,000 lakes”. Sixteen of those lakes are in Minneapolis and our house was actually on a lagoon separating Cedar Lake and Lake of the Isles. A bridge enabled me to serve customers on both sides of the lagoon. There were about 80 customers on my Shopping News route.

My first 20 customers were on my side of the bridge and down wind. It was tough going and took nearly an hour. The rest of my route however was on the other side of the lagoon and against the wind which had picked up considerably. By the time I reached the middle of the bridge I was exhausted. I thought “Oh my god, I am going to die. I’m going to freeze to death right here on this bridge!” I looked for some shelter. There was none. I looked at my toboggan and the bundles of paper covered with snow. I was in serious trouble. There was no way I could deliver the rest of those papers to the 60 or so homes left on my route, and I sure couldn’t bring them home with me. What would my boss say? What was I going to do?

I had only one choice. There were three bundles left. I threw all three off the bridge. They landed in the deep snow that covered the frozen lake below and disappeared. Relieved, I headed back to my house.

I suffered tremendous guilt for about three days, but none of my customers complained figuring that like the Tribune, the Shopping News delivery had also been cancelled due to the storm. And besides, who cares about The Shopping News? After all, it’s a “throwaway”, and I did what they were going to do anyway… I threw them away.

Now Minnesota is famous for its long winters, and this year set a record. Spring came late. It was April before the snow began to thaw and the ice on the lake began to melt and break up. I had forgotten all about the jetisoned Shopping News. I guess I just assumed that they were gone forever.

Then one day in early May while crossing that bridge, which I did at least twice a day six days a week, I saw them, The Shopping News. However, they were not in nice neat bundles anymore. The twine with which they were bound had rotted away and the papers were loose. Individual sections in four page units were floating all over the canal under the bridge and out into Lake of the Isles. I couldn’t believe my eyes. Why didn’t the damn papers sink? I was miserable.

I ran home in desperation. I dug out my canoe which was still covered with thawing snow. I dragged it down to the water, paddled out and began collecting soggy papers, virtually page by page. It was a desperate and fruitless effort. The papers were all over the lake, and by then it was getting dark. I headed home exhausted. I hadn’t made a dent. My God; what would people say?

I got the answer the next day when I picked up my Morning Tribunes. It was right there on the front page; a photo of me in my canoe on Lake of the Isles. The caption read “Boy Samaritan helps clean up strewn newspaper mess on Lake of the Isles.” I was not identified in the caption, but judging by the congratulatory comments I received, everyone I knew saw the paper. To most people I was a hero. To this day no one except my friend John White knows the whole terrible truth, and John pledged to keep it strictly between us Paper Boys.